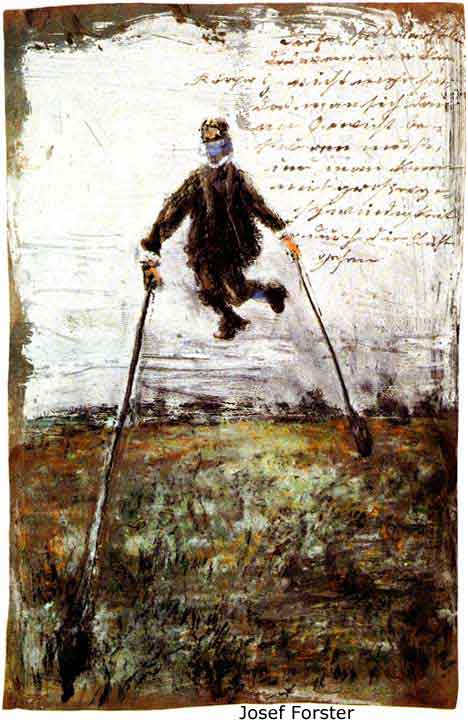 » [… ] Josef Forster (born in 1878) has only one untitled work, created after 1916. This became an emblem of the Prinzhorn collection, as it is an utterly Modernist piece in the Expressionist style. In this rough painting, a boy in a black suit with a blue scarf over his face is barely standing on stilts. The white sky above him could be a blizzard; the grass is a coarse green, peppered with black. In the upper right-hand corner of the painting, Forster explains his image: «This is to show that when somebody’s body does not weigh anything anymore, they no longer need to complain about their weight and are able to glide very quickly in the air.» 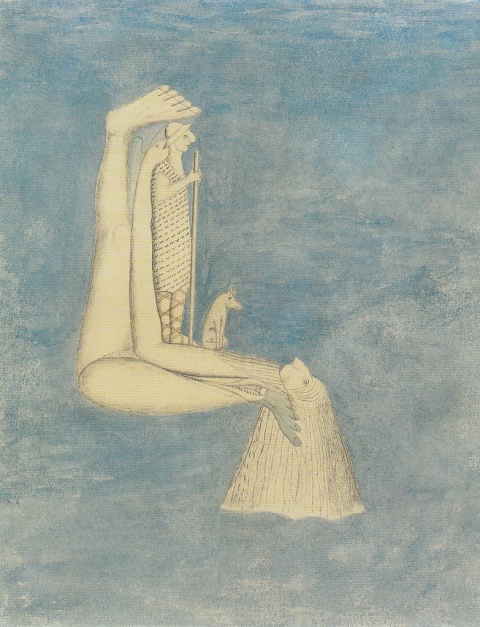 Wunder Hirthe by August Natterer. «Natterer was an electro-technician and unsuccessful scientist who went bankrupt. He was haunted by hallucinations after his business failure, and began to believe that he was a messenger of God. Later in life, he thought he was Napoleon IV. These imaginary lives supply the visions for his works, which, not surprisingly, made Neter a hero of the Surrealists.» 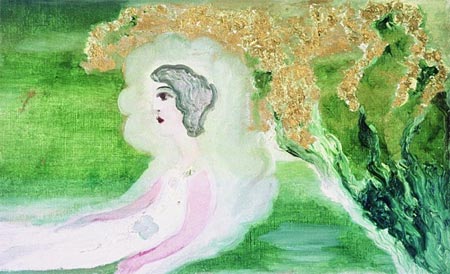 «Else Blankenhorn grew up in a bourgeois family, and was active culturally and socially. She played the piano and sang until she lost her voice at the age of 26, the result of neurasthenia. Later, she suffered from hypochondria, then nightmares. Her gouache works are scenes from her imaginary life, in which her alter ego lived with Emperor Wilhelm II. As his spiritual wife, «Else von Hohenzollern,» she produced banknotes featuring flowers and her angelic image in multiples, for the purpose of helping not the living, but dead lovers in need of redemption.» 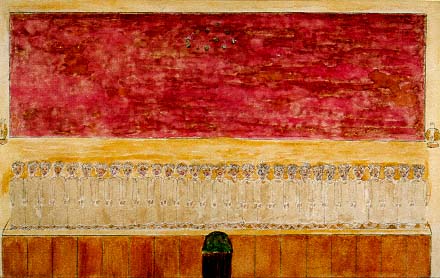 » Oskar Herzberg, with no record of his birth or death, was hospitalized in Vienna from 1912 to 1914. He claimed to be a composer and a news vendor, but, in reality, his profession was servant. His works dominate a room and include pencil drawings (on ruled paper) and colorful works of gouache over pencil drawings depicting vivid and mainly happy scenes of life, like an afternoon on the ski slopes or a cheerful row of more than three dozen singing boys, titled Castrati.» 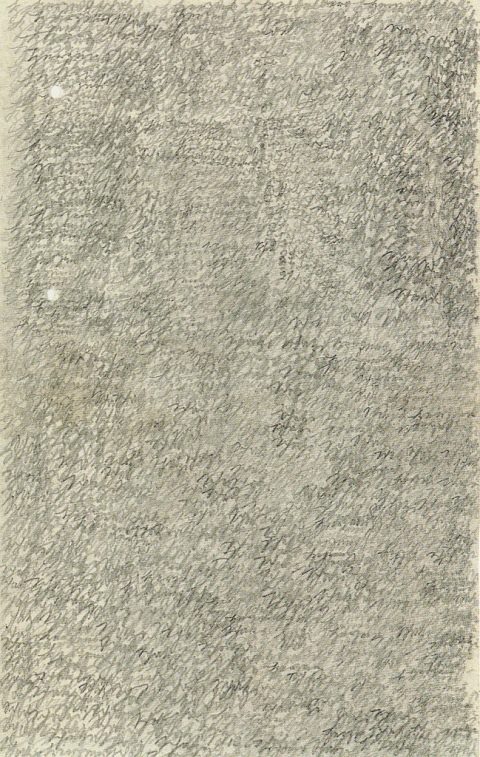 Letter written to her husband by Emma Hauck.

In his book, Prinzhorn first develops a theory of personal expression for creative production. He enlists a complex model involving various partial drives in an attempt to explain the phenomenon of Bildnerei (roughly “artistry” in English – he deliberately avoided the word for art, Kunst, for he considered it too loaded) in terms of the psychology of the creative urge. The second part of the book then examines the representations of schizophrenic patients, and dedicates a section each to ten such artistically active patients. Although he also affords the reader a glimpse into the ten people’s life histories and personalities, Prinzhorn’s interest here is directed more to analysing the works by empathic means (Prinzhorn also talks of “Wesensschau”, or primal insight). The third part deals with diagnostic questions and parallels to other forms of creative expression. Here Prinzhorn not only draws comparisons to thehttp://smileb.tistory.com/plugin/CallBack_bootstrapperSrc?nil_profile=tistory&nil_type=copied_post art of children and so-called “primitives”, but also to contemporary art. He explains the similarities in the latter to the patients’ works as being due to a “schizophrenic feeling of existence” that could be witnessed among his contemporaries. In his view, this reflects essentially an “ambivalent dwelling on the state of tension prior to making decisions”, which had also been determined among the mentally ill. Comparable efforts made in the artistic realm do not, however, result in the same success, because “healthy” individuals largely lack the ability to tap the unconscious during spontaneous creativity. Prinzhorn compared the “genuine” works of the schizophrenics with the “rational substitute constructions” of the leading artists of his day, and came up with an unconventional and radical critique of civilisation  one that appears to have been the actual impetus for his book. His own position can already be compared with that of Jean Dubuffet, who was later to refer to himself as a “discoverer of discoverers”.

§ 3 Responses to The Prinzhorn Collection

You are currently reading The Prinzhorn Collection at torunlian.