A. in Wonderland, kapittel 2, The Pool of tears 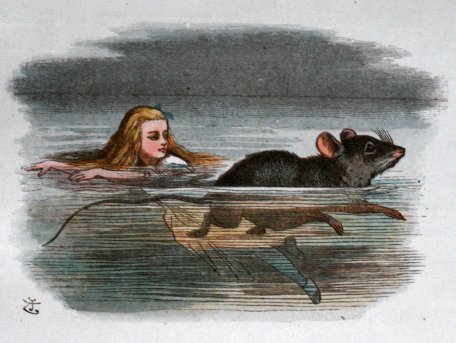 «As she said these words her foot slipped, and in another moment, splash! she was up to her chin in salt water. Her first idea was that she had somehow fallen into the sea, ‘and in that case I can go back by railway,’ she said to herself. (Alice had been to the seaside once in her life, and had come to the general conclusion, that wherever you go to on the English coast you find a number of bathing machines in the sea, some children digging in the sand with wooden spades, then a row of lodging houses, and behind them a railway station.) However, she soon made out that she was in the pool of tears which she had wept when she was nine feet high.

‘I wish I hadn’t cried so much!’ said Alice, as she swam about, trying to find her way out. ‘I shall be punished for it now, I suppose, by being drowned in my own tears! That will be a queer thing, to be sure! However, everything is queer to-day.’

Just then she heard something splashing about in the pool a little way off, and she swam nearer to make out what it was: at first she thought it must be a walrus or hippopotamus, but then she remembered how small she was now, and she soon made out that it was only a mouse that had slipped in like herself.»

You are currently reading A. in Wonderland, kapittel 2, The Pool of tears at torunlian.